“Aunty, haath peeche karo na!” I told the woman standing behind me, although I knew it wasn’t her fault that her hand was pressed against my buttocks. We were among a crowd of thousands—packed tight like honeycombs of a beehive—who had gathered on Lakshmi road to watch the Ganpati procession before visarjan.

I was standing on my toes, trying to see what the infinite wave of bobbing heads was hiding from me. I could hear it in the distance though, that sound, like a storm heading towards me.

“I can’t see a thing!” I yelled at my friend Kunal, separated from me by half a dozen people on my right. But every single time drumsticks collided with synthetic skins, stretched taut over the open ends of wooden barrels—the dhols—I felt it, as goosebumps drew upon my flesh, as if my skin was cackling with glee.

The dhols were getting louder. The heat was rising. The storm was forming its head.

The crowds pushed. The volunteers in front, with their hands locked and forming a human chain to let the procession pass through, dangerously flirted with the rangoli that was laid out on the roads. 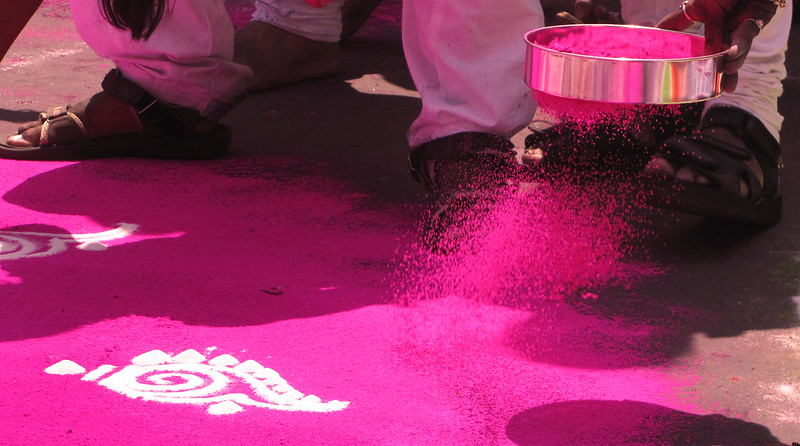 And then I saw a glimpse, of saffron silk flags dancing in the skies as their bearers danced to the beats of the dhol-tasha, their energy rippling through the crowd. A hundred cameras flashed above the sea of heads. A push here, a shove there.

I caught a glimpse of a red bandhini pheta before it melted into the crowds. I saw a dimpled smile in the shadow of a pearl-encrusted nath. I watched in awe, at those faces smeared with sweat and pride. Those finger tips wrapped in strips of white.

The ground trembled, almost. The pathak had come. The storm had arrived.

The dhols sounded their battle cries, their baritone broken by high-pitched clang of taals. The lezims jingled, as cymbals danced their merry dance.

There was an element of madness in their way, in the way they performed, as if in a trance. A madness that trickled down to everyone watching, as the crowds swayed to the beats, moving in tantalizing harmony, their chanting feverish.

Have you ever felt a pulsating artery? That’s exactly how I felt as I watched the storm unfold. When I saw the first glimpse of the idol in the distance. When heads bowed and hands joined in reverence. When old, dilapidated buildings, crowded as they were, chanted with us - those who filled the streets below. When men and women, boys and girls performed with dhols and tashas, their adrenaline beating the unrelenting sun. When I felt the music become one with my pulse. When I felt our collective pulse become the music.

As the music gained crescendo, so did the madness. The flags rose higher. The movements, frenetic. And such was the fervour of that moment, that even those in the crowd lost their breaths, as if they were the ones performing.

“Ganpati chya jai jai kaar!” I screamed this time with the rest of the crowd, not feeling any different from them, not anymore. And in that moment of madness, we united. The sweat. The dirt. The joy. The juggernaut.

A special thanks to my friend Kunal for letting me use some of his photos and also, for dragging me around like a rag-doll through busy roads and helping me watch this spectacle, which I have otherwise not had a chance to see for over a decade of staying in Pune.