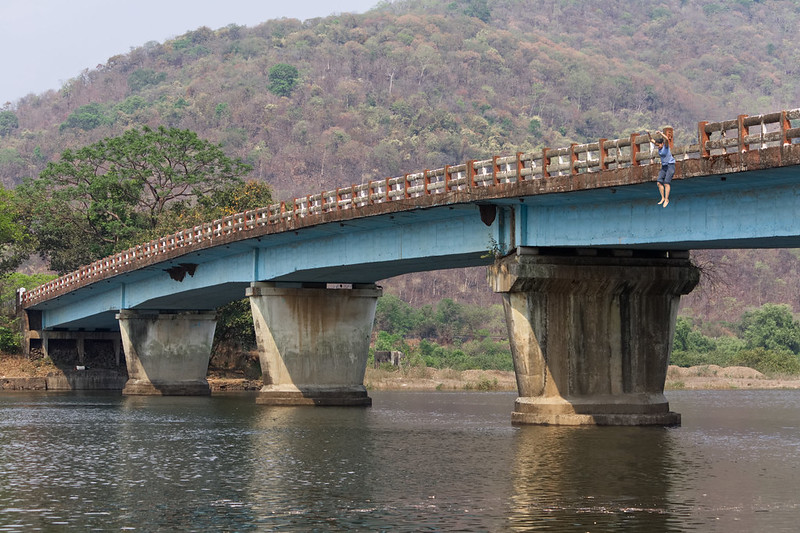 Khushal and I stood at the edge of the bridge, looking down at the river some 30 feet below, contemplating.

“Do you think it is deep enough?” I asked.

He nodded his head saint-like.

“Can you two please get it over with? We are burning out here!” Manali yelled from near the bank of the river below. Harsha stood next to her, her face solemn. Both shared the shade of a makeshift umbrella fashioned out of a pink dupatta.

It was a scorching summer day of March. We were on our way back to Pune from Velas – a village in Ratnagiri district in Maharashtra. The four of us had been driving in Khushal’s run-down car through the arid landscape for hours, hungry, thirsty and very, very sweaty. Had it not been for Khushal, our designated driver, abruptly halting mid-way and announcing – “I wish to jump into that river,” we would have all dozed off for sure.

While the two other women, gifted in great abundance with common sense and rationale, decided to watch us from a safe distance, Khushal and I walked towards the middle of the bridge.

Khushal dropped a piece of rock, no larger than the size of my fist, into the water and said, “It is deep enough.”

Suddenly, in front of my eyes, flashed twelve years of elementary education spewing such terms as buoyancy, Archimedes’ principle and raising many important questions - how much of an iceberg is submerged below the water if the density of ice is 917 kg ⁄m3 and the density of water is 1000 kg ⁄m3?

Meanwhile, behind us, the rare passing vehicle would stop every now and then to give us a curious look. I could already envision the headline in next day’s newspaper – lovers jump to death into river, parents refused to let them marry. YIKES!

Khushal jumped first. After he surfaced, he would turn around and tell me, “There is a massive beehive under the bridge! Be careful!”

My mouth now dry as the Atacama, I took a step back.

“Are you going to jump this year or what?” Manali screamed this time.